In the 1930's, 1940's and early 1950's three artists did a great deal to launch British engraving into the exciting waters of contemporary European art: the New Zealander John Buckland Wright and two Englishmen William Hayter and Anthony Gross. They all had French attachments and were quite independent of the influences of earlier and highly successful schools of British engraving. Buckland Wright helped Hayter to found his famous Atelier 17 in Paris. At this workshop, in which artists experimented at novel methods of printmaking, JBW (as became known by his initials) worked with artists such as Matisse, Chagall, Picasso, MirÃ³, Dali. Later when teaching at the Camberwell and Slade Schools of Art, he was able to communicate to his pupils his experience of how these artists worked.

JBW's work is characterized by the portrayal of the sensuous nude, in which the female form is depicted with grace and charm. The source for his artistic expression has its origin in his experiences during the First World War. Having joined the Scottish Ambulance Service, he was seconded to the French Army at Verdun, the sector in which the French suffered the greatest devastation during the First World War. There he witnessed harrowing scenes of human devastation while rescuing wounded and dying men from the front line trenches. Following the war, JBW found relief in drawing the female figure that incorporated the romantic ideal of Greek philosophy into the very essence of the emotional expression of his work.

Through his art he was able to come to terms with the horrors he had experienced during the war and to restore unity and tranquillity to the devastated landscapes, to repair the damage that war had wrought on his love of nature. Once more he would fill his world with beauty of a timeless quality he had experienced in the gardens and countryside of New Zealand and England. He found his emotional renewal through his art. It was in this way that he was able to express his fundamental belief in the renewal of life and of the human spirit and to rediscover the joy he felt as a young man in nature's soothing beauty. 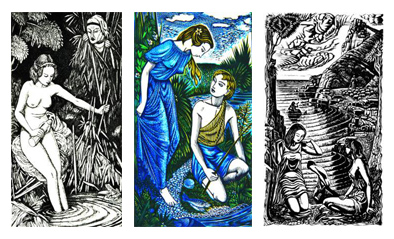 Show printable version of this page (opens in new window) >>